Vitamin B6 (pyridoxine) is a water-soluble B-complex vitamin. In addition to pyridoxine, pyridoxal and pyridoxamine also have a vitamin effect. Given this, vitamin B6 is called several structurally related compounds. It is an integral part of B-complex preparations, but is also used as monotherapy for hypovitaminosis.

As early as 1926, vitamin Bs deficiency was thought to cause dermatitis. In 1936, Gyorgy discovered a new group of structurally similar compounds called vitamin B6, which successfully treats dermatitis. In 1938, pyridoxine was isolated from rice husks and yeast.

Vitamin B6 is made up of a group of several structurally similar compounds. These are pyridoxine (alcohol), pyridoxal (aldehyde) and pyridoxamine (amine). All are pyridoxine derivatives and differ by group in position C.

Pyridoxine is a white crystalline powder. It dissolves in water, slightly worse in alcohol, is almost insoluble in chloroform and ether. It is stored in containers protected from light because it decomposes under its influence.

It is sensitive to light, although it is much less degraded when fed vitamin A or riboflavin. Under normal conditions, pyridoxine is poorly degraded, but when exposed to direct sunlight, it can be degraded by more than 80 percent in 8 hours. It also decomposes under the influence of alkalis.

All three components of vitamin B6 are found in nature. Pyridoxine is found in both plant and animal tissue, especially in the liver and kidneys, then in yeast, fish, cereals, soy, eggs, and various fruits and vegetables. It is an integral part of the body fluids of all living organisms. We can say that it is everywhere.

Pyridoxine, pyridoxal and pyridoxamine are rapidly absorbed from the gastrointestinal tract when administered orally. In the liver, all three forms are converted into active metabolites, pyridoxal phosphate and pyridoxamine phosphate, which are also deposited in the liver. The liver also oxidizes to 4-pyridoxine acid and other inactive metabolites that are excreted in the urine. Pyridoxal passes through the placenta and occurs in breast milk.

Pyridoxal phosphate is a coenzyme of a large number of enzymes, especially those that catalyze amino acid metabolism, decarboxylation, transamination and racemization.8'10 Pyridoxal phosphate also acts as a coenzyme in phosphorylases and as an important factor in protein synthesis. Vitamin B6 is also involved in tryptophan metabolism, ie. in the conversion of tryptophan to 5-hydroxytryptoamine.

Vitamin B6 deficiency excretes large amounts of tryptophan metabolites in large amounts in the urine. Vitamin B6 is also involved in the conversion of tryptophan to niacin. The formation of niacin through the mediation of vitamin B6 and vitamin D3 under the influence of ultraviolet rays are the only examples of endogenous vitamin production. Pyridoxine also appears to be essential in the synthesis of 7-aminobutyric acid (GABA) in the central nervous system and in the synthesis of heme. GABA is formed by the decarboxylation of glutamic acid, a process catalyzed by an enzyme in which pyridoxal phosphate is a coenzyme.4 Vitamin B6 also mediates the conversion of methionine to cysteine.

Although vitamin B6 is an important component of the human diet, clinical symptoms of its deficiency are very rare. Deficiency occurs with the use of some medications or is related to a deficiency of other B-group vitamins. Symptoms of pyridoxine deficiency are manifested in the skin, central nervous system and hematopoietic system.

Seborrheic lesions around the eyes, nose and mouth, accompanied by glossitis and stomatitis, have been observed in people deficient in B-complex vitamins.3,4 Preventable convulsions are also common. by adding this vitamin. Vitamin Bfi deficiency causes rare anemia (usually in children) that responds well to pyridoxine. Vitamin B6 deficiency usually occurs with a deficiency of some B-complex vitamins, so it is not used in therapy alone, but together with other B vitamins. Vitamin B6 is a component of many multivitamin preparations used in prevention in both children and adults .

Some medicines (isoniazid, cycloserine, penicillamine, hydralazine and probably also MAO inhibitors) have antivitamin B6 activity. Therefore, it is justified to use it in the prophylaxis of diseases in which peripheral neuritis and even convulsions occur. Vitamin B6 is also used as an antidote in patients taking isoniazid tuberculostatic overdoses or cycloserine toxicity.

Vitamin B6 levels are usually reduced in the blood of pregnant women and in women taking oral estrogen contraceptives. It is believed that the concentration of vitamin B6 is also reduced in alcoholics. Gooda documented indication for the use of vitamin B6 is a type of anemia, so-called pyridoxine-dependent anemia, and in such a case very high doses of vitamin B6 are recommended

Vitamin B6 has relatively low toxicity. In humans, neurotoxic effects have been observed with pyridoxine at a daily dose greater than 200 mg / day. For example, taking a mega dose of pyridoxine (2 to 6 g / day) for premenstrual syndrome can cause a range of disorders in muscle movement and expression. After stopping pyridoxine, recovery is slow, in some patients only partial.2 Excess vitamin B6 is usually excreted in the urine.

The use of vitamin B6 is justified in all cases of hypovitaminosis. Neurological problems, seborrheic dermatitis and keliosis are certainly indications for the use of pyridoxine. It can be given orally and parenterally. High doses are usually given to children with pyridoxine deficiency neuropathies.25

Pyridoxine is not recommended in the treatment of acne and similar dermatoses, in alcohol intoxication, asthma, hemorrhoids, migraines, nor as a preparation to increase appetite or stimulate lactation. Opinions on the use of pyridoxine in premenstrual syndrome are still conflicting, but pyridoxine is still widely used for this purpose.

Levodopa
Pyriodxin reduces the therapeutic effect of levodopa by accelerating the peripheral metabolism of levodopa. Carbidopa can be given preventively with levodopa, thus reducing the action of pyridoxine. If the patient is receiving levodopa alone, doses of pyridoxine greater than 5 mg / day should not be given. Concomitant use should be avoided. This is a clinically important interaction.

Phenobarbitone and phenytoin
Pyridoxine reduces the action of anticonvulsants and their serum concentration. Increases the risk of epileptic seizures. Concomitant use should be avoided. However, if the addition of vitamin B6 is necessary, it should be under strict medical supervision. Higher doses of pyridoxine (& gt; 2 mg / day) significantly reduce the effectiveness of phenytoin.

Oral contraceptives (estrogens + progestogens)
These medicines may reduce pyridoxine levels in the body. Vitamin B6 deficiency can cause some types of depression.

Corticosteroids
They also reduce the concentration of pyridoxine in the body. With corticosteroids, additional B vitamins are definitely recommended.

Hydralazine (as an integral part of antihypertensives)
Hydralazine and similar medicines can deplete the body's stores of pyridoxine because they act on essential enzymes. Vitamin B6 deficiency can cause depression or nervous breakdown (often trembling of the hands or feet). Additional amounts of B6 are justifiably needed with these medicines.

Isoniazid (INH), cycloserine, penicillamine
These drugs are thought to have antivitamin B6 activity (probably preventing the use of pyridoxine). Their use can cause peripheral neuritis. Symptoms disappear after the use of pyridoxine. Preventive use of pyridoxine is also recommended. Isoniazid preparations are already available today in combination with pyridoxine (eg Eutizon B6) and have been used successfully as tuberculostatics. 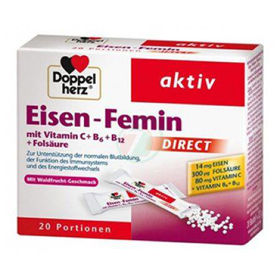 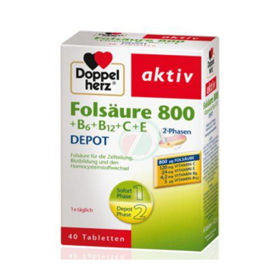 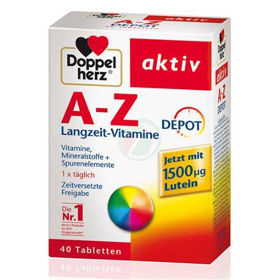 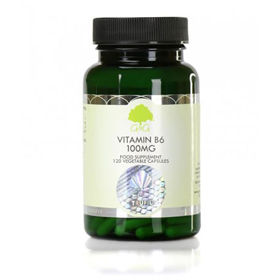 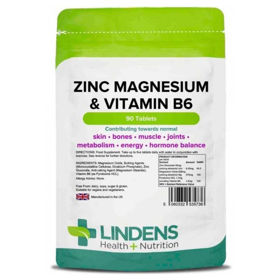 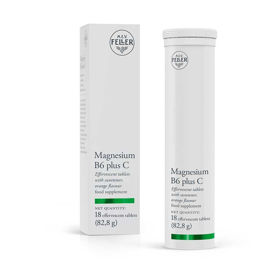 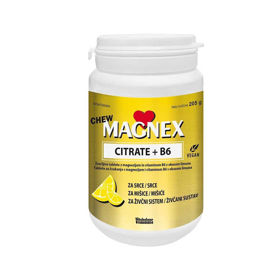 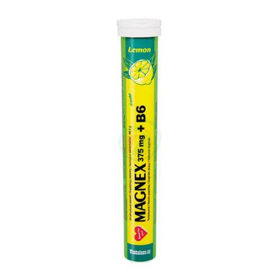 Magnex magnesium and vitamin B6 effervescent ... 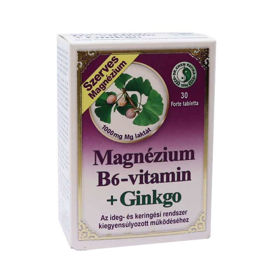 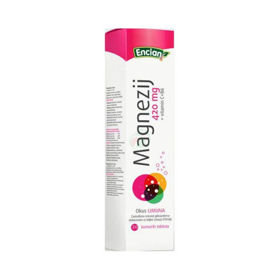 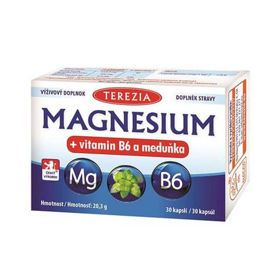 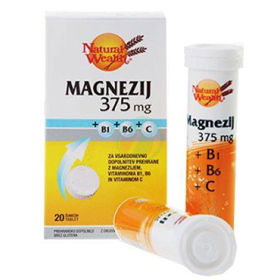 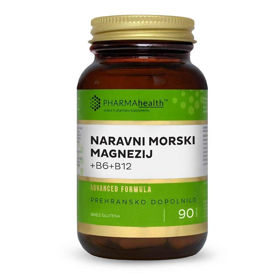 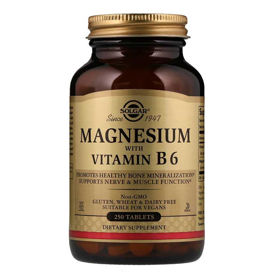 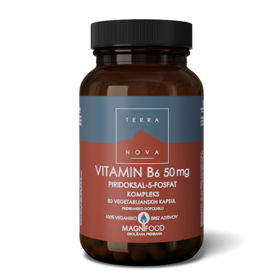